The Hunt for Predictive Biomarkers to Treat Soft Tissue Sarcomas

Gary K. Schwartz, MD, highlights research that is being done with regard to genomic signatures in sarcoma, challenges faced with immunotherapy, and where the field is headed. 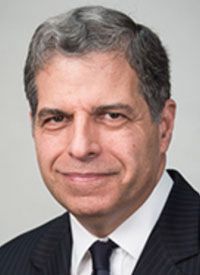 Although several research efforts have been dedicated to evaluating the use of immunotherapy in patients with soft tissue sarcomas, such as angiosarcoma and gastrointestinal stromal tumor (GIST), the hunt for predictive biomarkers for response to this approach and targetable signatures continues, according to Gary K. Schwartz, MD.

“[With
regard to immunotherapy], the key is to determine how to convert a “cold” tumor into a “hot” one. If we can figure this out in sarcoma, a rare cancer, we can then apply what we learn to other tumor types. I always make a case that this is an opportunity. This is a chance for us to explore the unknown,” says Schwartz. “Clearly, this is going to require innovative approaches and high-level science. We know that novel targets exist, such as CD40 and STING, and these can potentially warm tumors up when activated. Ultimately, there’s so much [to be explored] and this is the best place for innovation.”

In an interview with OncLive, Schwartz, a professor of medicine, chief of the Division of Hematology​/Oncology, ​and deputy director of Herbert Irving Comprehensive Cancer Center at Columbia University Medical Center, highlighted research that is being done with regard to genomic signatures in sarcoma, challenges faced with immunotherapy, and where the field is headed.

OncLive: What is the current standard of care when a patient is diagnosed with soft tissue sarcoma? Do they undergo genomic or PD-L1 testing?

Schwartz: At major cancer centers, we are doing tumor mutational burden (TMB) testing, which is a part of genomic sequencing. At Columbia University, all patients [with
sarcoma] have PD-L1 and TMB testing done as part of their standard of care. We are able to find patients who have high TMB and PD-L1 expression, and they seem to be the patients who respond the most [to immunotherapy], although they don’t respond all the time. As such, I don’t believe that either biomarker is sufficient to be predictive, even though there tends to be favored outcomes in patients with high levels of TMB and PD-L1 expression. To date, we still don’t know the cut off for PD-L1. Is it over 1% with regard to tumor proportion score? We do not know for certain. We hope to have a better understanding when more data become available.

What is some of the research that has recently been done with regard to genomic signatures in sarcoma and understanding which patients will respond to immunotherapy?

A paper recently published in Nature had a large sarcoma database of several hundreds of patients and [investigators] assessed the ability of RNA-seq to look at genomic signatures. It is interesting because they find multiple subsets of sarcoma, 2 of which were considered to be immune high, while others were immune low. One of the subsets included patients with undifferentiated pleomorphic sarcoma (UPS) who responded to PD-1–based therapy, such as nivolumab (Opdivo) or pembrolizumab (Keytruda). There was a sign that patients with a high RNA signature had higher responses [to
treatment]; interestingly, they also had this infiltrate of B cells, which have called tertiary lymphoid structures. They had a pathological signature of these B cells congregating together in the tumor. Now, that’s an fascinating observation.

What are some remaining challenges?

The use of molecular biology, genomic alterations, and the pattern of mutations appear to be predictive in some patients of outcome and benefit with immunotherapy. We’re going to get better at identifying which subsets [will benefit most from immunotherapy]. However, will nivolumab, pembrolizumab, and ipilimumab (Yervoy) be enough? With these immune signatures, I believe we’ll find some that show clear benefit. However, what about the tumors for which these signatures don’t exist? What about the “cold” tumors? Melanoma tumors are
“hot.”

When you look at this scale of TMB, from high to low, you have melanoma and lung cancer at the top and sarcoma at the very bottom. This is extremely frustrating. The bottom line is, we must learn more what makes a tumor “cold.” Where are the T cells? Where are the B cells? They’re in the body, just not in the tumor.

What are some of the immunotherapy data that have read out during the 2020 ASCO Virtual Scientific Program?

Doxorubicindata were presented at the 2020 ASCO Virtual Scientific Program by Seth Pollak, MD, of Seattle Cancer Care, and colleagues, and suggested a slight improvement [with this approach], although I believe the jury is out. None of these studies were randomized; they mostly had mixtures of different sarcoma subtypes. This is the problem. If you enroll more subtypes that are sensitive to immunotherapy, such as UPS and alveolar soft-part sarcoma, you’re going to get a positive signal, which can inflate the outcomes. As such, I believe the only way to solve this is by conducting randomized trials in which these different subtypes are stratified and balanced between treatment arms.

Data have also been reported regarding the combination of immunotherapy with agents that block angiogenesis.Again, these studies look promising and the numbers appear to be high, although I would only advise caution. If you look deeply into the subtypes analyzed, you can make a study that would be neutral or negative become positive; this can be done by adding in all the “right” subtypes. If you look deeply at these studies, you will see how they are being stacked. Leiomyosarcoma, for example, is a rather immunologically inactive tumor. If you have a study that enrolled many patients with leiomyosarcoma or uterine leiomyosarcoma, it’s going to be negative because PD-L1 therapy just doesn’t work in that sarcoma. That’s why many of these studies try to avoid inclusion of those patients to try to increase the numbers of the active ones. That’s something we have to deal with as we interpret the data.

After looking at the data, I’m cautious. There are some hints or suggestions of benefit, although I’m not yet convinced that we’ve made great progress in combining chemotherapy with immunotherapy.

Where should future efforts be focused?

Frankly, I believe [the next big thing is] going to be identifying new targets. That’s something we have to really apply our science to, but part of the problem is that we have limited satisfactory models. Oftentimes, we test using animals; however, tumors that grow in mice do not have a thymus. They’re called athymic mice and they have no T cells, and as such, they’re not comparable to our immune system; they have no ability to mount an immune response. Unfortunately, the only way to test these novel targets will be in human trials.

The ALLIANCE A091401 trial focused only on subtypes of patients who had a signal, UPS and dedifferentiated liposarcoma, and also retested the [approach] in patients with GIST. Unfortunately, the GIST cohort did not show a response. However, what about the other sarcoma subtypes and how do we get those patients to respond? We can focus on these highly sensitive subtypes, but the real challenge now is going after those who show minimal or no activity [to
immunotherapy].

We also have to focus on those who are highly sensitive to identify the biomarkers. We will be presenting biomarkers among these patients in future ASCO presentations, to assess what is special about the responders, what is unique about those who respond the most, and the greatest progression-free survival, and if we use these data to better understand the impact of new therapeutics in the field of sarcoma. I believe we have a long way to go. I wish I could say we reached the end of the road, but unfortunately, we are at the beginning of our travels.

What is your take-home message?

The take-home message to the pharmaceutical world is that sarcoma is where novel drugs should be tested. Hopefully, we will see this being done in the near future and at the 2021 or 2022 ASCO Annual Meeting, we’ll be looking at new studies with these novel targets, that are assessing how immune signatures impact drug selection.

I’ve been an oncologist for about 30 years. I’ve seen amazing changes over time from the basis of chemotherapy, to the advances of targeted therapy within precision medicine, and now the field of immunotherapy with new drugs targeting PD-L1 or CTLA-4, such as ipilimumab. I’m hopeful that we can change the field of sarcoma in the same way we changed the field of other solid tumors with immunotherapeutics.