Chondrosarcoma: Making the right diagnosis, grading and the proper classification

Chondrosarcoma (CS) is a bone and soft tissue cancer that develops in cartilage cells particularly in the arm, shoulder, pelvis, knee, femur, spine, ribs and base of the skull. It is the second most prevalent primary malignancy of the bone. The prevalence of Chondrosarcoma is rare: estimates range from 1 to 5 in 1,000,000 people, depending on location. This wide range might be expected, based on the difficulties inherent in diagnosing CS, and the skills and equipment needed to do so. One would expect that the best staffed and equipped locations would have larger numbers than those who are not so fortunate, but this is not always the case.

Because Chondrosarcoma is rare, there is a lack of information. Primary care physicians and oncologists have little or no guidance on where to send patients with Chondrosarcoma. In the Summer, 2020 the Bone Cancer Research Trust (BCRT) conducted an international survey and reported that 65% of all patients with Chondrosarcoma are misdiagnosed. This results in significant delays in proper care and significantly impacts the outcome. This position paper contains diagnostic/pathological information geared to guide oncologists and other medical professionals to make appropriate referrals to pathologists that specialize in diagnosing rare bone and soft tissue sarcoma and to ensure the diagnosis is accurate the first time. The information in this position paper can also be very useful for CS patients to gain a greater understanding of their own diagnosis and can help them take charge of determining their specific course of treatment.

For medical professionals this document is intended as an overview of the types and grades of Chondrosarcoma to familiarize you with this rare bone and soft tissue cancer. For patients and caretakers undergoing the diagnostic process I would make the following suggestions in your review:

1. Read the article carefully with particular interest to your diagnosis. 2. Use search engines to look up any medical terms that you do not understand.
3. Insist on getting your own pathology report and pictures of the slides from your biopsy.
4. Insist on having an opinion from an expert sarcoma pathologist who specializes in bone and soft tissue cancers about your diagnosis.
5. Find a Qualified Sarcoma Center with a multidisciplinary team to explore your treatment options.
6. Do not hesitate in seeking second opinions along the way, especially at crucial decision-making points (biopsy/pathology, treatment options, etc.)
7. Feel free to e-mail the Chondrosarcoma Foundation with any questions you have regarding the article and how it relates to your diagnosis. Our e-mail address is: info@csfshayna.org

The vast majority of chondrosarcomas (roughly 80-90%) are known as conventional intramedullary (central) and occur as a primary neoplasm (tumor) in previously normal bone.1,2 Most conventional chondrosarcomas grow slowly and either do not metastasize or do so only late in their natural history. Conventional chondrosarcoma generally occurs in older patients within the center (medullary canal) of long bones of the extremities or within bones of the axial skeleton (pelvic bones, skull base, ribs, and sternum). Conventional chondrosarcoma is graded on a scale from I-III (low-grade: G1 to high-grade: G3). Grade I chondrosarcoma, synonymous with central atypical cartilaginous tumor when located in an extremity, is a hyaline cartilage neoplasm consisting of sheets of chondrocytes which show some features of aggressive behavior with the surrounding normal (host) bone either by histologic evaluation or by imaging. 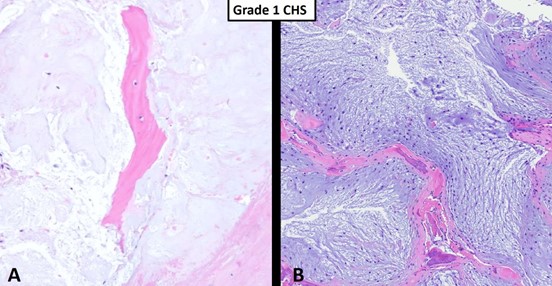 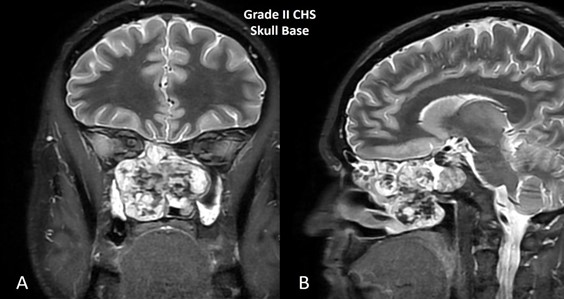 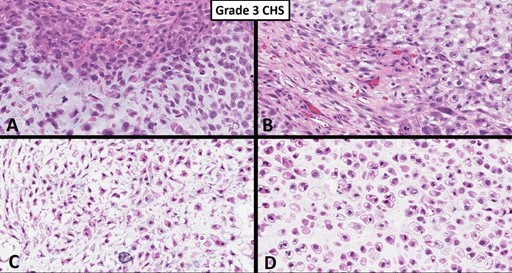 The grade of chondrosarcoma is an important predictor of behavior and subsequent clinical outcome; however, important caveats need mentioning. First, definitive grading is not always possible on biopsy specimens. Second, histologic grading of chondrosarcoma is subjective as diagnostic criteria are not well established. Third, many chondrosarcomas may progress (transition to a higher but not a lower grade) and, therefore, adequate sampling of a resection specimen by the pathologist is necessary to evaluate for higher grade areas. 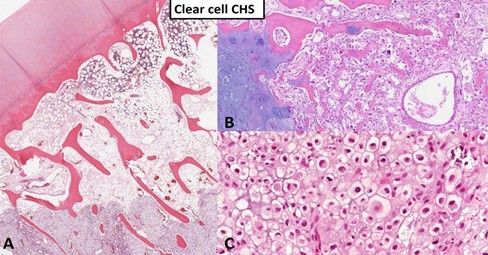 Fig. 7 Mesenchymal chondrosarcoma. A High-power image of mesenchymal chondrosarcoma showing a biphasic neoplasm consisting on a mixture of a small round blue cell tumor and a second component of well-differentiated hyaline cartilage. B Intermediate power photomicrograph showing a predominant small round blue cell tumor with nodules of hyaline cartilage. Note the branching vascular pattern also known as “hemangiopericytoma-like”.

While not necessary for the diagnosis in most cases, genetics have been recently applied to further define chondrosarcomas and other tumors in the differential diagnosis, such as chondroblastic osteosarcoma, which has a vastly different treatment approach (osteosarcomas are treated with preoperative chemotherapy). In general, chondrosarcomas can be grouped into four main categories by genetic analysis; those with IDH1/IDH2 gene mutations and secondary “peripheral” chondrosarcomas characterized by mutations in EXT1 /EXT2 genes, chondrosarcomas with recurrent gene translocations such as HEY1-NCOA2 in mesenchymal chondrosarcoma and those without consistent genetic alterations.11

Finally, the treatment of most conventional chondrosarcomas is generally surgery without chemotherapy or radiation. However, innovative approaches towards treating Chondrosarcoma that inhibit and suppress cell growth are being studied. The referral for treatment of Chondrosarcoma should be in a specialized Sarcoma Treatment Center with a multidisciplinary team approach. The Sarcoma Alliance contains a list of these specialized centers. https://sarcomaalliance.org/resources/sarcoma-center/list/ The histologic grade, subtype of chondrosarcoma and the clinical stage (tumor size, location, presence or absence of metastasis) are all necessary constituents to the overall multidisciplinary treatment plan. 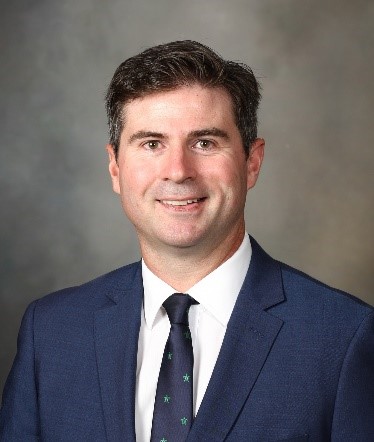 John M. Gross, M.D. is a Faculty Assistant professor, bone and soft tissue, surgical pathology at Johns Hopkins University. John M. Gross, MD joined the Chondrosarcoma Foundation Board in May, 2020. During his transition from the Mayo Clinic in Rochester, MN to Johns Hopkins University in Baltimore, MD; Dr. Gross worked on this article in his spare time. It is written to educate Oncologists, Sarcoma Specialists, Oncology Surgeons, Oncology Radiologists, and General Practitioners as well as patients diagnosed with Chondrosarcoma.