Mike Snyder: A Pioneer with A Warrior Spirit

We are just two weeks away from hosting Chondrosarcoma Awareness Day on February 6 (Shayna’s heavenly 32nd birthday). This is our international effort to educate the public about this rare bone cancer and to build a coalition to support more research and clinical trials. The more attention we create, the more support we generate.

Here is all we ask:
We ask that you join us by wearing a Yellow Ribbon or a yellow wrist band and post pictures wearing Yellow on social media platforms using the hashtag: #cswecare We also ask that you reach out and educate your family, friends and co-workers about chondrosarcoma, help them understand that we need to bring awareness to fight this deadly bone cancer as we build a strong coalition. Encourage them to join us by simply going to our website to add their name and email address to our petition:

In addition, we use Chondrosarcoma Awareness Day: February 6, to share stories of our community / our family who provide us with inspiration. Each week before February 6, we share a new story about a member of our community. Some of our members lost their battle with Chondrosarcoma, others are surviving, leading productive lives with the help of surgery, radiation, orphan medications and clinical trials. Our first dedication was Parker Jeffrey Morgan who at the young age of 21 with his whole life ahead of him lost his battle with Conventional Chondrosarcoma Grade 3. Two weeks ago, we shared the story of Amber Sarcone, a young special education teacher and a guidance counselor at a Charter School in Philadelphia and a Super Fan of the Philadelphia Eagles, who last night attended the Divisional Championship to lead to Eagles to a victory; on to the NFC Championship. Amber has conventional chondrosarcoma which evolved from Osteochondroma which she had before her second birthday.

Last week, we paid tribute to Julie Mathews. Julie lives near Orlando, Florida with her husband Aaron and her two son’s Aiden (16) and Tyson (14) O’Berry. Julie and her family know how to have fun and whenever possible they go to the beach, Disney World, and other fun places. Julie is the ultimate champion, warrior and fighter. Despite what ever obstacles are in front of her, Julie does everything she can possibly do to confront and win those battles. She is without a doubt a pioneer who is leading the way for patients with Extra-skeletal MyxoidChondrosarcoma by enrolling and getting treatment in the Phase 1: Non-conventional INBRX 109 clinical trial. Julie is an inspiration in how to persevere, keep fighting and never give up.

This week we pay tribute to our Patron Pioneer and Warrior: Mike Snyder. Mike has been fighting chondrosarcoma for over 26 years. Even as a child Mike fought multiple enchondromatosis. I first learned about Mike shortly after I lost my daughter (before the pandemic) and watched a local news package about a man in Alburquerque, New Mexico fighting chondrosarcoma, and his success by having his clinical trial medication sent to him locally. I reached out to Mike through Facebook because I wanted to recruit him to join the Foundation. After meeting Mike, I learned that he published a book: No Treatment Options Left, that chronicled his journey with chondrosarcoma in detail. Mike immediately accepted my invitation to join the CS Foundation. He and his lovely wife Sarah (who is currently recovering from double knee replacement surgery), have been very close friends, confidants and supporters. Over a year ago, my wife, younger daughter and I had the pleasure of spending time with Mike and Sarah, while vacationing in New Mexico. Mike’s journey with chondrosarcoma is nothing less than inspirational. He has participated in several clinical trials but the most recent with INBRX has resulted in being stable and a significant reduction in pain. 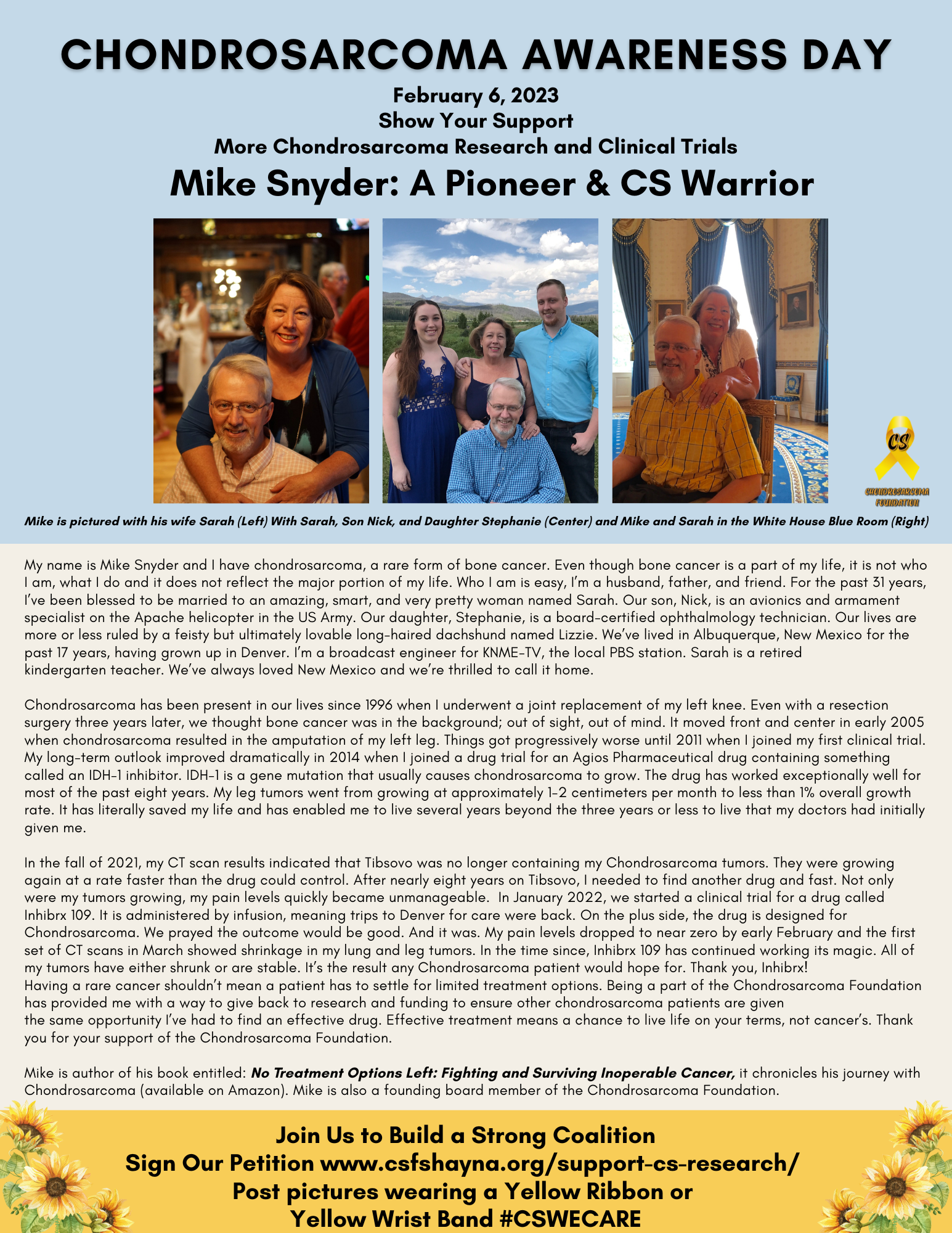